We are back from Italy. We had a nice trip with our two boys Patrick and James and Patrick’s girlfriend Emma. We ate lots of Pizza. Drank many many caffes and had gelato twice at the same gelato bar in Rome. We were brought to this particular bar by Antonella who we met at Fiore Market Cafe. She has been a regular customer almost since the day we opened. Over the years we talked about meeting in Rome.. We got the chance the day after Christmas. Antonella took us on a lovely tour of Rome that culminated with a stop at Tre Scallini for gelato.

On Monday we met Marvi and Stefano’s mother Agusta at the Trastevere train station in Rome for another visit which also ended with a stop at the exact same gelato bar. They told us the exact same stories. It was as if they were related. I guess they are in the sense they are Romans.

The air was brisk for most of the time we were in Italy. The first few days, Christmas Eve and Christmas were fine. Not too cold. The sky was clear. The sunsets magnificent. We cooked the first two days and hardly spent a penny. The only time we did was for trips down to the blue bar for coffee. James and I opened the bar on Christmas Eve and Christmas day. Only because we were up at 4am due to jet lag. The barista couldn’t quite figure why these crazy  Americans kept showing up so early. She asked me don’t you sleep. I replied that 6:00am is late compared to the time I rise in LA to bake bread at our cafe. Once we got adjusted to the jet lag we walked over about 7:30.

The sun doesn’t rise until  7:00 or 7:15. The windows to our apartment were covered from the inside by dark wood shutters which kept out the sun and the cold. It also allowed us to sleep in..

On Christmas we roasted a chicken Fiore style. I bought the chicken at the supermarket. It looked like something you might find in LA. It was a whole chicken placed on a Styrofoam plate wrapped in plastic wrap. I was expecting to see the chicken in the deli case hung upside down with the legs and neck still intact. Were the Italians becoming like us, I thought to myself? Later the evening we started to prepare our Christmas dinner. With the family by my side doing other things to get the dinner ready I unwrapped the plastic and grabbed the chicken expecting to see the same sort of thing I see daily when I prepare chicken at Fiore. I normally have to pull the innards from inside the cavity before I clean, salt and pepper the bird.  This time in that cold apartment in  Italy it was different. As I lifted the bird from the plastic plate it’s neck and head and legs and feet popped out. They were still attached. Everyone shrieked.

We managed to roast it none the less and it tasted good, real good. I sauteed some bitter greens and roasted potatoes in good olive oil. Anne dressed the salad with balsamic vinegar and that same  olive oil. It was simple, but exactly the ways Italians eat a salad.

We enjoyed our dinner at the table by a blazing fire. It was our first night together and the start to our week. 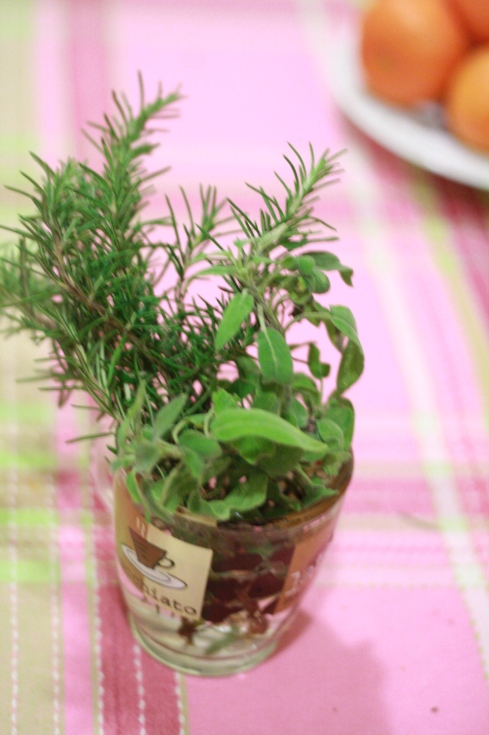 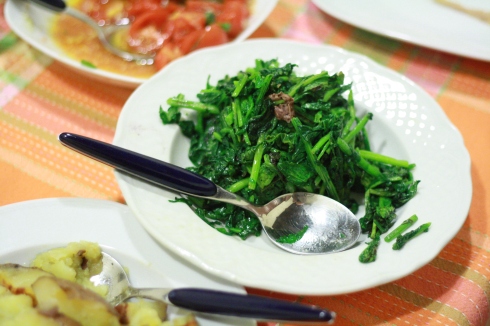 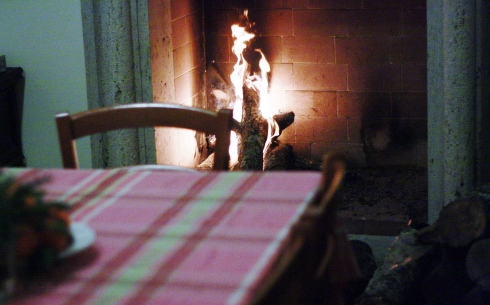 I am a bloody Irishman, but a real Italian Wannabe. I'll take Italy over Los Angeles and Dublin any day. Give me a plate of homemade pasta and an espresso with lots of crema and when I am through eating and I'll think I am in heavan. END_OF_DOCUMENT_TOKEN_TO_BE_REPLACED
This entry was posted on Tuesday, February 3rd, 2015 at 1:22 am and posted in Uncategorized. You can follow any responses to this entry through the RSS 2.0 feed.
« Fiore Market Cafe Fresh Cookbook
Second Edition of Fresh to be ready next week »